An appetite for destruction: Just how many species will a lionfish eat?

Any diver in the Caribbean can tell you that a lionfish will eat just about anything, but a new study has found that there really are no limits. Researchers were astounded to find 167 different species in lionfish stomachs, and they suspect they still don’t have the full picture. 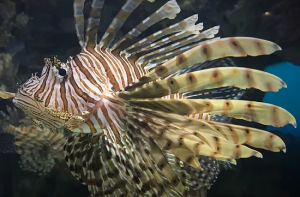 The lionfish invasion began in the 1980s off the coast of Florida, and from there they have spread throughout the Caribbean and the Gulf of Mexico, and as far as North Carolina. Lionfish are “opportunistic generalist carnivores”, meaning they will eat anything unlucky enough to cross their path, but 167 different species is still an unusually wide variety. This is probably because lionfish are new to the area and don’t act like a typical hunter, so many species don’t recognize them as predators. By the time they realize they’re in danger, it’s too late.

Lionfish don’t act like normal predators, instead they confuse and mesmerize prey with their long, flashy fans.

The researchers collected over 8,000 lionfish for this study from Bermuda, North Carolina, The Bahamas, Florida, the Gulf of Mexico, the Yucatan Peninsula, Belize, Costa Rica, and the United States Virgin Islands. It was a massive effort involving researchers from NOAA, The National Marine Fisheries Service, and universities in North Carolina, Florida, California, the Virgin Islands and Costa Rica.

While most of the species eaten by lionfish are not likely to go totally extinct, local extinction is still a big problem. Our Field Reporters tell us that when the lionfish invasion hit with full force in Little Cayman the Arrow Blenny was pushed to the brink of extinction. After years of no sightings, it was only brought back by lionfish culling efforts on the island.

The Arrow Blenny is a success story, but other species might not be so lucky. Even if a species doesn’t go extinct it can still suffer “ecological extinction” when there are so few of them left they can’t play their normal role in the ecosystem.

This study shows that lionfish prefer wrasse overall, but that can vary from place to place. They also like shrimp, damselfishes, sea bass, and many others, so if there’s no wrasse to be found they’ll simply pick a different food. 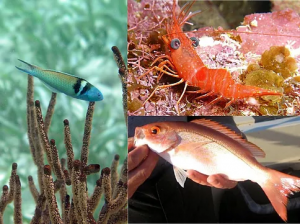 The lionfish’s favorite foods are the Bluehead Wrasse, the Red Night Shrimp, and the Vermillion Snapper (also known as Rubia).

One of the lionfish’s many favorite foods is the vermillion snapper, an important fishery species for many coastal communities. It’s managed by both the National Marine Fisheries Service and local Fishery Management Councils, it’s considered “vulnerable” by the IUCN, and its population has seen huge declines in the past three decades. We don’t know yet how the lionfish have impacted the snapper fishery, but if the invasion continues to spread it can only be bad news.

Surprisingly, most of the species lionfish like to eat are carnivores, rather than herbivores. This might be less about preference and more about the overfishing that has historically plagued the invaded areas. Human disturbance can make any ecosystem more susceptible to disturbances, and overfishing makes it harder for a reef to fight back against an invader. The team speculates that if the reefs had been pristine they would have found a lot more than 167 species in their lionfish.